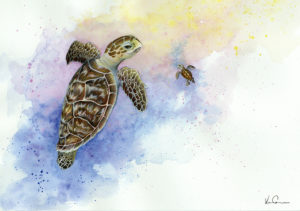 Say hi to the Hawksbill sea turtles! They are found mainly throughout the world’s tropical oceans, predominantly in coral reefs.
Cool facts about them:
They are named for their narrow, pointed beak. They also have a very distinctive pattern of overlapping scales on their shells that form a serrated-look on the edges. These colored and patterned shells make them highly-valuable and commonly sold as “tortoiseshell” in markets.
They are threatened by the loss of nesting and feeding habitats, excessive egg collection, fishery-related mortality, pollution, and coastal development. However, they are most threatened by wildlife trade.